So this day finally happened.

I took a day off from work/kids/fiancé/dog just so I could make U2 gifs. And frankly, I should do that more often. Nothing like being stuck in a room with those four guys all day. Musically speaking. Obviously. Ahem.

So you might ask me why? Why would I do that? Well ask the U2 team. The first remastered videos on the U2be (I’ll never stop using that, stop whining) were released like once a week, something like that? I can’t really remember. That was 6 months ago so in pandemic time it’s probably the equivalent of ten years or so. Anyway. I had found my cruising speed for making gifs out of those. And all was good in the world. Well, at least in that one.

BUT – for whatever reason – the 80s came back to bite us in the arse. As always. Freaking 80s.

And it feels like those remastered vids are dropped out every odd day now ! Like hot Bono cakes straight out of the cake heaven factory. And if your plan was that I wouldn’t keep up with the gifs crap, well done fellas. You beat me. Big time.

So I took a day off. And prepared a nice list of 7 or 8 vids I haven’t desecrated yet. But see, I made a mistake. I started with one I hadn’t watched yet. One I’m not even sure I had watched in its entirety in my whole U2 fan life (I know. Here’s my fan card. Just take it. I don’t care, I have copies)

I ignorantly started with A Celebration vid. Oh boy. Oh man. Oh sweet mother of all bananas. Tumbling down the gif gold mine, my sanity spiralling out of control, and my ribs cracking from the laughing fits…. Yeah. Day off, my arse.

That video works a lot better than shrooms to tackle the mysteries of the universe. Because all I was left with at the end of it was why, and what, and how, but most of all, why.

So many questions. Too little answers….

Why are Adam and Larry singing? Why the whole dimensional portal? Why is Bono pretending to be half drunk?  – we all know what it looks like and it isn’t that.

Why is Edge the only one treated like a supermodel on this one? (looking hella good, i’ll give you that). Why the hair? Why the pants? Why the heavy smoke? Why? WHY?

Oh the 80s, what a glorious time. The peak of all the WTF music videos and haircuts, when none of that stuff needed to be drug induced, it was just the norm. Seriously guys, I know I’m sounding harsh and judgemental and whatever, but maybe I am. WHY?

It took me almost my whole damn day off to make those gifs. The WHOLE day. And that’s probably because I had the utmost fun with that vid. And the fits of laughter delayed the whole process.

So before you start throwing bananas at me, I’m not in any way trying to undermine the work that has been done on this video back then. I think it’s brilliant. It was probably a good one, but the hell should I know, as Bono likes to remind fans like me more and more often, I wasn’t even born. (Sidenote : You’re not the only one who isallowed to be young not dumb man. Ha.)

… maybe I was wrong about the drugs

REAL footage of Larry breaking Adam out of jail

Funny yes, and it’s not a bad thing. It’s like everything else. You look back to stuff like that, to other eras in time, but you always do it from your own perspective and obviously it changes everything. You’re biased. Full of preconceptions. Evolved?

Maybe if we could look back to the past a bit more objectively once in a while, we wouldn’t be making the same mistakes all over again, and turn our world to… yeah. That. Anyway. We can all do our part I guess. And I’ll shut up on that matter and let far smarter people deal with that.That being said, if I have learned anything today, is that red pants day is not necessarily the best idea.

Except for small men with big ideas, then it works fine, just fine.

So yeah, I couldn’t help but have a laugh  looking at it all with my 2021 vision.

It probably wasn’t meant to be that funny back then. There’s prob a lot of things it wasn’t supposed to be back then. Or maybe it was and we all just forgot that the 80s were also flirting with the thin line between sexy and… err, sexy works fine – you can forget the why on that.

Oh come on. Don’t tell me there’s not a vibe. Or maybe it’s just me watching all those video frames in slow motion… Yeah. Probably that.

Bono not using his body to boost sales.

Look at them though. They were just boys, and I’ll be damned if they weren’t having fun that day. Proper baby rockstars, newborns almost. And yet, they look fantastic. They already had that sound, that charisma, that presence… It’s mental. Baby punk n rollers on their way to become the biggest rock band ever.

They look happy and that vid makes me happy – so, really, that’s all that matters. Who cares about looks? It was the 80s, we all have pics with questionable outfits and bad haircuts. Oh wait.. I wasn’t born, right – self pat in the back for swerving that one.

In the end, it’s all just gifs and it doesn’t have to be more than that. It’s always good fun though to stumble on stuff that gets you thinking and revisiting that other reality we call the past – portal non included.

More seriously before I finally shut up, It’s a tremendous work that has been done on those vids. It’s just mind blowing. And no matter how much I may have or may have not snickered at some of those, this is a freaking gift for the community. In all honesty, I probably wouldn’t have watched some of the old videos if it wasn’t for the remastered versions. Because yes, full disclosure – I’m part of that generation of entitled brats for whom quality video also means high definition. I’m a high res sucker, a 4K believer, and those low res videos just make my eyes bleed. Have I mentioned entitled brat yet ?

So THANK YOU whoever is working their arse off to bring us such a treasure. Much appreciated.  And eh… let’s be honest, you had a few giggles too didn’t you ?

I have nothing else to annoy you with for now, god bless the 80s and all those people who shine a light on them in high res. Next batch will be all about the mullet™ days, and I’m prob gonna need a whole week off for that. Ha… another time, same place !

In the meantime, you know where to go ! Enjoy !

Love is in the air… 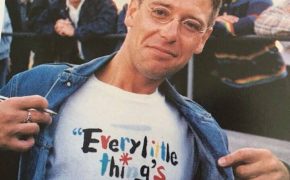