It’s been a little while since I posted but I got busy refreshing U2’s feed waiting for some acknowledgement of POP 25th. Spoiler alert, always a waste of time.

Apologies, I get cranky sometimes – mostly Mondays – when I experience lack of coffee – and rockstars.

I woke up sad this morning for some reason. The reason being not the lack of coffee but that other one.

I’m sure you experience those moments too when your numb brain just starts screaming the hell out at you ‘YOU MISS U2‘ like a nagging brat, and you’re trying to be the boss (for once) and you’re just ‘chill lord I know that.’ But nope. It keeps badgering you with it until it physically hurts – most headaches are just due to mental arguments with yourself about fictional issues really – and eventually… you cave in.

And there you are just a brooding mess, heavily sighing and muttering ‘me sad’ at the walls of your house because no-one else around really has any patience left for your shit. Or you take it to twitter, where no-one cares either because everyone’s also busy muttering at virtual walls or being an expert at some new crap happening in the world.

So I woke up this morning missing those guys. A lot. Actually a lot deeper than usual. Because I woke up not just missing these four blissfully wonderful men – gotta make up for that Pop attack (they are though) – but also missing that sound.

I woke up just craving a new U2 song. Like chocolate during fasting, like a sunburn in the dead of winter, like peace on earth for more than 5 minutes in the history of humanity. You know. Those impossible things you want right here, right now.

Well. We have to deal with what we have like always so I’ve got a new verse for you lads :

The sweetest melody is the one we haven’t heard

Just give me what I want, and no one gets hurt

It almost works though. Ha.

There’s only one solution to that kind of mood really, and it’s to shush that incessant yacker in your mind. And of course, the best way to achieve that is noise. Noise louder than thoughts. Noise that brings silence or peace or else. Music.

Alright then. Let’s fight fire with fire and make this a U2 day. Time to get lost in music to find yourself again.

I’m a big fan of playlists in general. I usually just put on something that fits the mood and go with the flow.

But I’ve been very well behaved with U2 lately. Listening mostly to full albums, songs in the designated order too. Very well behaved indeed. Oh boy. That is so not me. What have I become? I mean it works, of course it works it’s meant to but hell, I’m a mess, I need a little more mayhem in my music.

So I went for the ‘This is U2‘ playlist, allegedly U2’s greatest hits – which include approximately half of their catalog. Oh wait, that’s actually accurate – and went for it.

And so I did. Songs after songs. Hours after hours. Completely hooked on that sound, on those guys, on those songs that are just freaking everything. Each and every one of them just spurs something in you. Kick your arse. Make you smile. Bring tears to your eyes and joy to your heart.

I love the shuffle mode on streaming platforms just because I love the way the universe kinda takes over your playlist and makes it perfect – I’m aware that’s just the damn algorithm working its fake magic but damn people let me be vaguely poetic for a second.

It’s just absolutely crazy the number of songs these guys have made that are exactly what you need to hear and feel.

And of course we know that. Our little U2 fans’ heads are filled with those songs on a daily basis, but listening to them all one after another is pretty darn fantastic honestly.

I was dying to go get another round of coffee – that’s a lie, I had laundry to do but for the sake of my reputation and this blog accuracy let’s pretend it was coffee – but I just couldn’t get up. Just one more song. Just one more. One more. One. 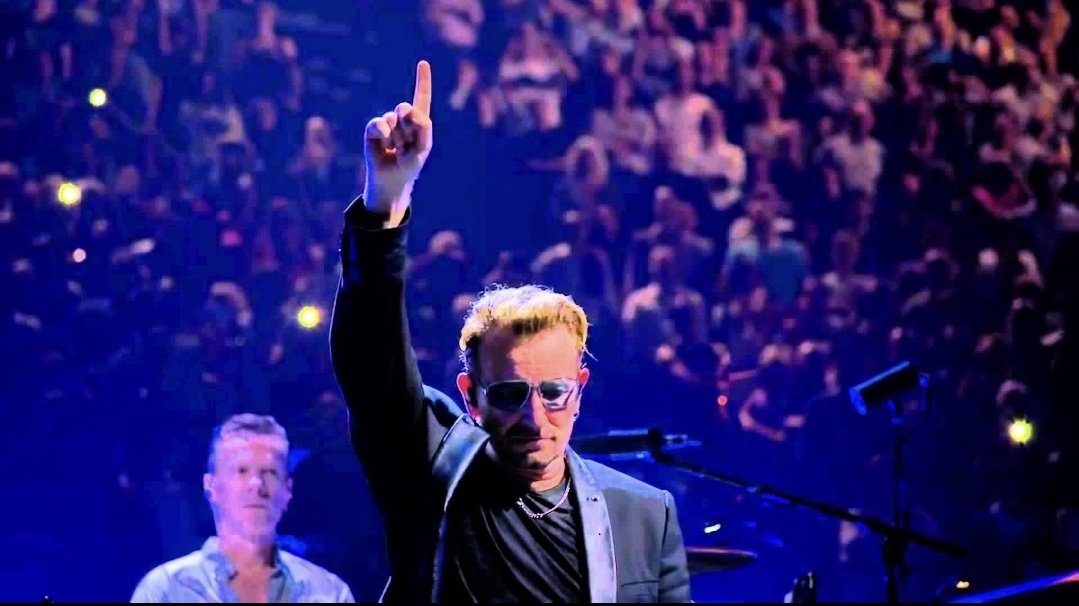 One kept coming back on shuffle – I know, it’s not supposed to, that’s what happens when you have 20 tabs open for work and hit refresh randomly – and sweet baby jesus, mood Bro, MOOD.

For those interested I managed to get up from my chair after a couple of hours and The Miracle Of Joey Ramone – mind conditioning from the IE days, I get so hyped I gotta move.

And of course, probably all part of the universe/algorithm masterplan, I came back to Your song saved my life. Seriously. Of all songs. Not sure if I had to laugh or cry – so I did both.

Ha. If you’re a U2 fan you probably get it. If not, I’m sorry but I’ll never be able to explain it.

As the day went by and the songs let my heart take over my mind, my mood improved. The yelling in my head stopped.

And the weight on my shoulders of the past few weeks lifted substantially.

Because they’re our happy place.

Because they’re our safe place.

And when Stuck in a moment started playing for the 3rd time I just laughed because yeah alright I get it, fine guys, you’re here, no matter how. You’re here and you’re little pains in my arse but I love you alright.

We’ll shout (for joy) into the darkness and squeeze out sparks of light.

I can ruin every word that man has ever spoken I swear. Don’t blame me, the moon is in taurus or some shit.

Ha. Back on track alright. At least for today.

I’m still craving a new U2 song, but I was more than happy to be reminded that a quick fix never fails. Or a 4 hour long playlist fix.

You miss them. I miss them. We all miss them but they’re right here. On your vinyl player. On your laptop. In your pocket. Wherever you go or whenever you need them.

So here’s a comforting thought for ya.

That will never change and that’s freaking beautiful.

Have a good week y’all.