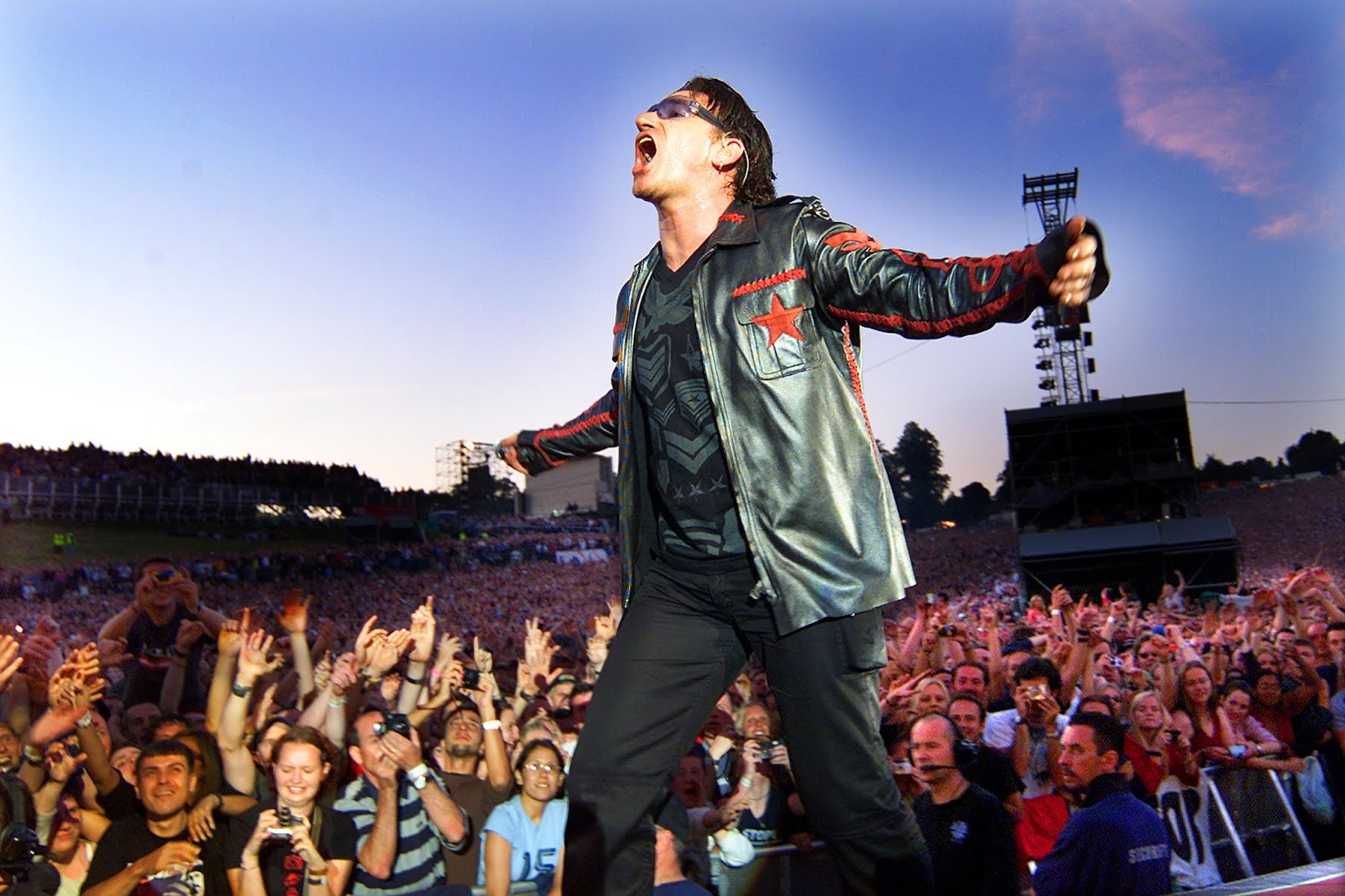 Well U2 Fam. It happened.

Last night, the first of the 4 streaming events happened. And it was all we could have wished for and even more. Spoilers ahead for those who haven’t watched yet.

Countdown on, anticipation at its maximum, adrenaline rushing through our veins, getting ready to be let into the sound when…

Oh yes guys, there was Edge, cool as ever, greeting us virtually – that man was born to Zoom – and introducing us to the pre show guest Dermot Kennedy. It felt just so good to see him. Like the rest of us, just a meeting ID away. 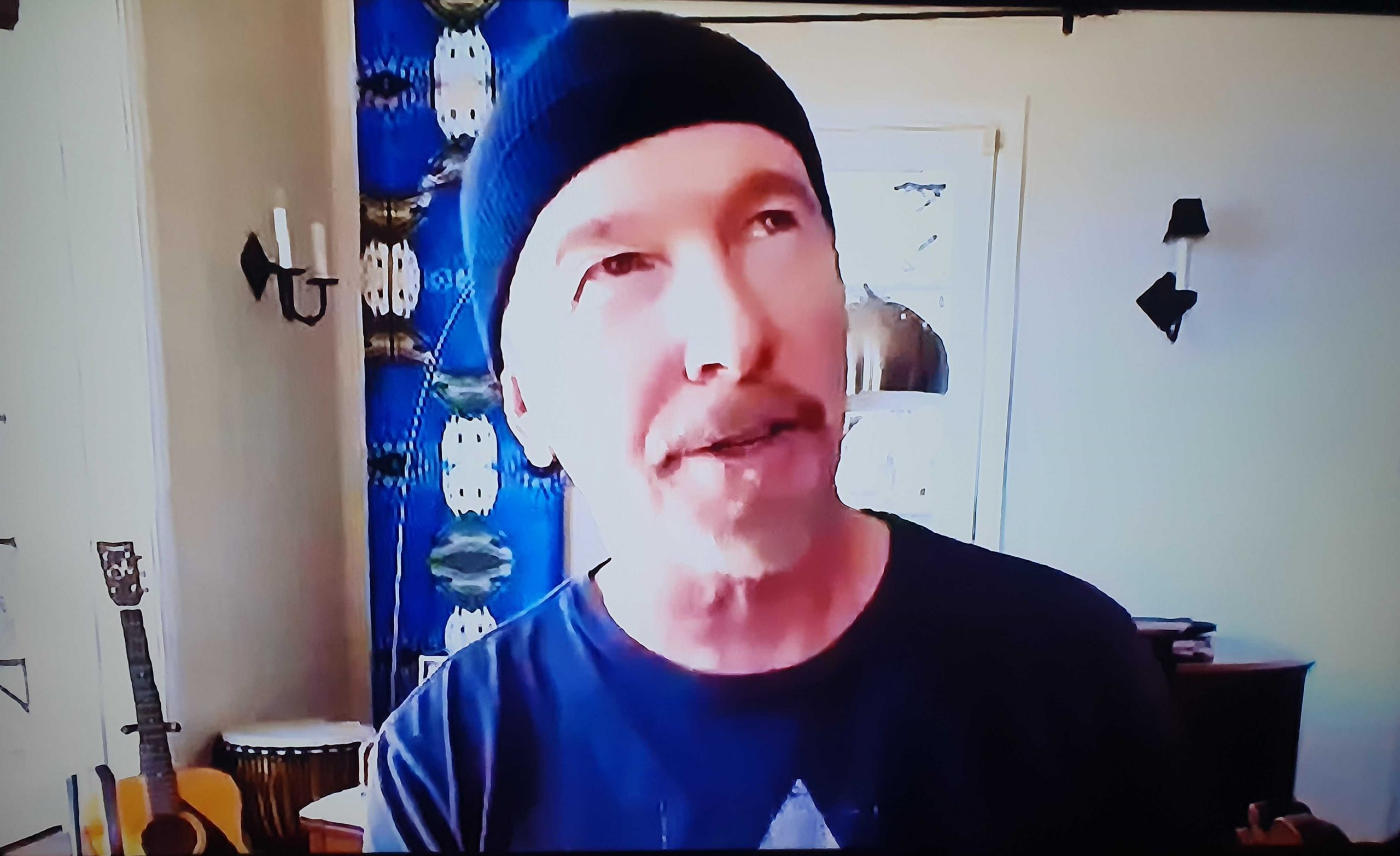 Back taking pics of my TV because of reasons.

Now. Before I lose my shite about how good it felt to spend the evening at Slane, I’ve got to write a few words about Dermot.

I’d been told by a number of people lately to check his stuff, that it was great, and I’m always on the lookout for new music so of course I added it on my list – thing is, i didn’t get the chance to go that far just yet. I was so very pleased to see he was the chosen guest for that first show, because it meant that our first ‘musical encounter’ would be live – and obviously music doesn’t get much better than that.

Well. I wasn’t wrong guys. The setting was just sublime, the feed quality pristine, even his hoodie was bloody perfect “Dreams blossom in time”. Ha. I like a good dreamer. I knew we were on for a treat before he even started singing honestly. But when he did…. Wow. Just, wow. That fella has such a voice. If it doesn’t hit you right in the feels, you’re probably already dead. That’s the kind of voice that reaches your soul if you let it. Amazing performance.

English is not my first language, so it’s always hard for me to catch the lyrics on first listen, especially when I’m not used to a voice, but when someone on twitter mentioned that those were pure poetry, I could only agree. You could feel that poetic atmosphere in the sounds themselves, and what a mood guys. The planet doesn’t need more “successful” people; the planet desperately needs more poets – because they love. Because they heal.

This was a real treat. So thank you U2 for giving that lad the opportunity to blow our minds, and thank you Dermot for that wondrous gift to the world that is your music. You definitely won a few more fans last night.

That pre show definitely opened our heart a bit more for what was next. And as always, what a shock to the system that was.

U2, just as planned, saved our St Patrick’s day with this legendary show. I won’t dwell on the show on itself for too long, because of course we all know it by heart by now, but more on what it inspired. Again. No matter how many times you watched it. It was pretty special.

Just like every other show, past and future, we jumped on that roller coaster and took our feelings out for an incredible fast ride. Up, down, up, and down again… each song hitting you emotionally like the first time you heard them. I danced. I bounced. I shouted for joy. I lost my shit. I cried. I reflected. And yes… I felt alive.

Those events are like the fastest run you’ll ever take while standing still. Like projecting your bare soul at the speed of light through the sound. Getting it back bruised and scruffed, but finally whole. Infuriating salvation that band puts you through. That rush, that thrill – it’s really ours as a community of fans I think. It doesn’t make sense, but eh, as I often say the best things usually don’t. You can’t explain it, you just have to live it.

This whole evening felt like a breath of fresh air.

I scrolled through my twitter timeline this morning, and I realised that we were all on the same page. We needed that. And we all realised just how much last night. As one of our wisest voice in the community stated perfectly – “Let’s be honest, we’re not living without live music”

That tweet hit me like a bus, because like simple truths, it’s too easy to forget it. Never completely of course, but the sense of wonder we get from it. That feeling filling our hearts. Joy, love and hope spilling over the brim. Ha. Yeah. Something like that.

I knew how much we needed that. I knew what a blast that evening would be. Of course I knew. I ‘ve been through that dozens and dozens of times.

But as always, I wasn’t ready for it. You never are. And thank fck for that.

And I also know that I’m not the only one feeling that way – sun is rising over Europe as I write those words and that live stream is now closing on 240K views. Not bad U2ers. Not bad at all. Remember that it will only be up for 48 hours, so let’s boost those numbers and prove to whoever still needs proof that these events WORK.

If you’ll indulge me to borrow my own words to finish :

I miss my band.

I miss my friends.

I miss my family.

But last night some of it was returned. And for now, that’s well enough to push us further down that road. The Virtual Road with U2.

Next stop is Red Rocks with Fontaines DC. on 25th March 19:30 PST and of course I couldn’t be more excited about it. This is like my dream gig at the moment. But… Time Zones.

That’s a move from the U2 team that I can only applaud. Each show will start at 19.30 on different time zones so it’s more convenient for everyone. Fair. It’s brilliant.

Ha…Dammit. I really have to stop getting up in the middle of the night for Irish bands.

Meet you at the rail folks – you really thought i’d miss that?! 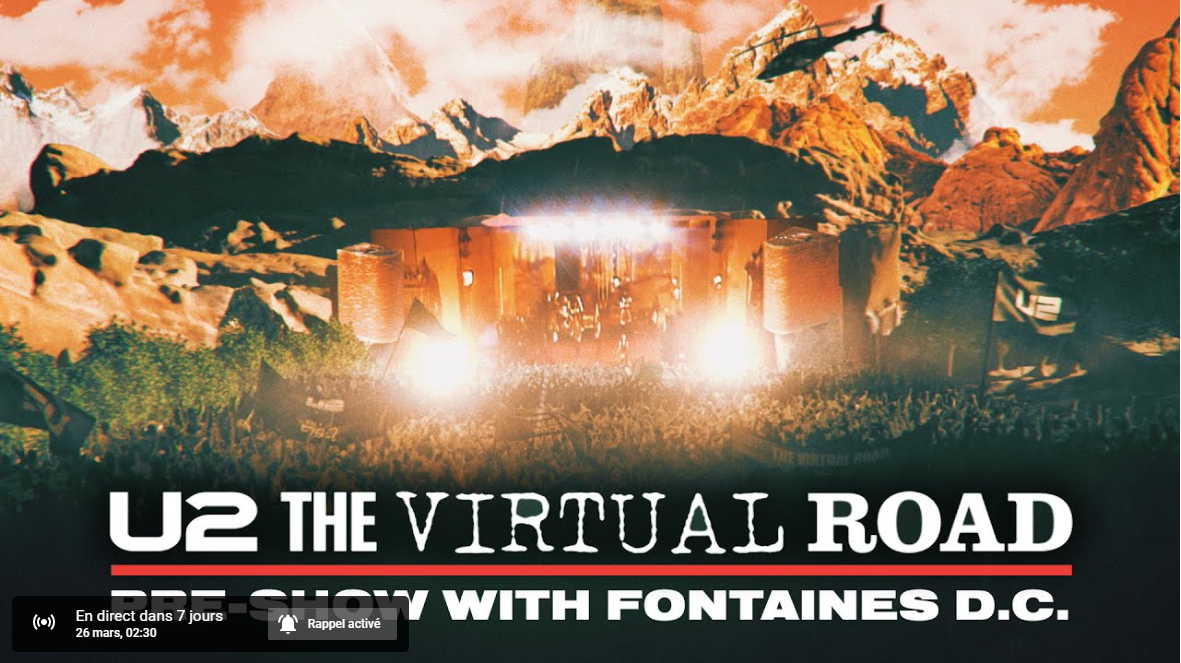 On the Virtual Road with U2

Some Zoom more than others